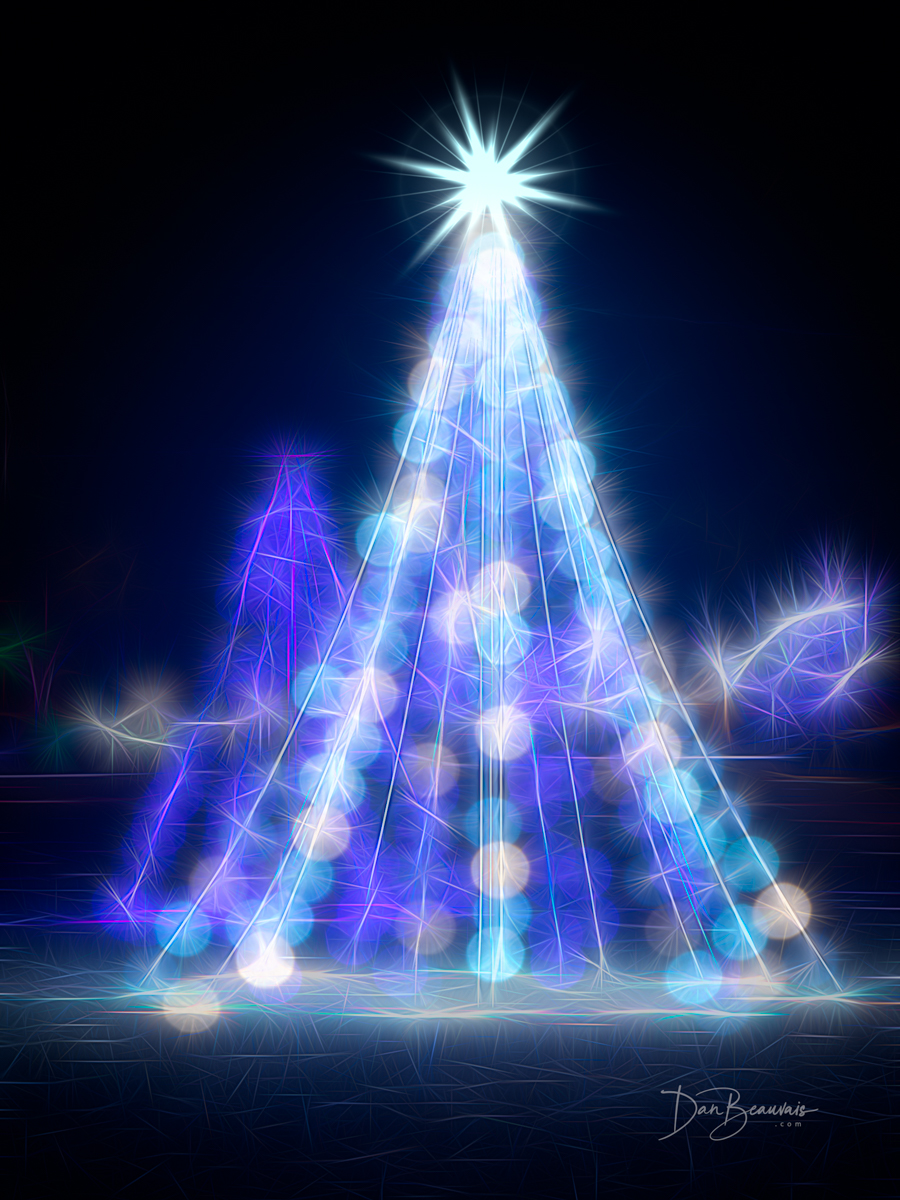 I’ve always been fascinated with light. When I was a child, I loved to daydream, in the darkened living room, at the foot of the family Christmas tree. I would let my eyes defocus, turning the points of light into soft glowing orbs, and letting my imagination run free. As an adult, I still have this fascination. And I try to capture this playfulness with lights in my photography.

My neighborhood has a display of Christmas lights in a small park along a busy central road through town. One recent night, I explored with my camera. Preferring simple compositions, I found an uncluttered view of two wire-frame Christmas trees strung with lights, one predominant, another peeking from behind. The scene avoided lights from the passing traffic, store signs, street lights, and lights from nearby homes, and minimized clashes with other displays in the park.

The lights on the wire-frame trees were pretty. But a literal photo of them was rather bland. I did not have the sense motion of me passing by, or the wind fluttering the lights. Our two eyes allow us to perceive depth, but this depth is lost in a two-dimensional image. Gone was the beauty of a casual look, replaced with the stark reality of what’s frozen in time for deeper study.

Using a tripod to hold my composition steady, I made a series of sharply focused shots, at varying exposures. I did this with the intention of gathering raw ingredients for a recipe I would later develop. I then imagined the lights as I’d see them with defocused eyes. This is easy to simulate with a camera. Still in the same position on my tripod, I defocused the lights a bit, and shot several images at varying exposures. Then defocused some more and shot another series of exposures. and again further defocused. My ingredients for a future recipe.

I’ve always considered the camera work to be just small part of my creative process. Much of my vision is applied in the digital darkroom. For this project, I combine selections of my raw ingredients, and develop my recipe by experimentation and taste. I seek to create the final image as I imagined it in my mind’s eye.

I first imagined overlaying the sharp image with a defocused image. I put each in their own layer in Photoshop. I blended the images, by taste, with the Opacity control. Nice, but I continued to experiment. I wanted some additional excitement.

Topaz Labs Studio 2 offers a Radiance filter. It can transform specular highlights, such as sharply focused Christmas lights, to resemble electric sparks. I applied the filter to the sharp image, and experimented to achieve this look. Then saved it as another layer in Photoshop.

With the sparks layer overlaid onto the sharp and defocused layers, I used the opacity control of each layer to achieve a pleasing balance of the three layers, much like an audio engineer adjusts the volume of each instrument in a band to get a balanced sound.

There was no star on top of the tree, so I again used Topaz Studio 2. With the Flare filter, I added a stylized star at the peak of the front tree, and tweaked it to taste.

As kids, we fingerpaint, playing with blending colors and shapes, letting our imagination run free. In photography, we can similarly play, combining images and filters, re-creating the fanciful images of the dreamy orbs of Christmas lights from our childhood. Or any image that stirs your imagination!